Skip to content
Summary – Recently GoPro has launched the new GoPro Hero 7 Black action camera with tons of new features. It may look as similar to the Hero 6 Black but when it comes to performance, it has great improvement.

The Hero Black 7 is a pocket-friendly, Waterproof 4K camera with hyper-smooth video stabilisation and smart-capture superpowers. The other two release of new action cameras also boasts of excellent features.

The GoPro Hero7 White is the all-new entry-level model, with the ceiling of 1080p video recording. The next GoPro Hero7 Silver is featured with 30fps 4k resolution and 60fps 1080p resolution.

Overall, the GoPro Hero 7 Black is the best action camera you can buy today.

There is no surprise that design of Hero 7 Black looks very similar the last two GoPro Hero’s models.

Though the GoPro has changed the color this time, from the traditional grey to black for this new model. The only major change in Hero7’s hardware is its redesigned microphone, which is designed to improve the overall sound quality by reducing the noise from shaking moments like bike rides. 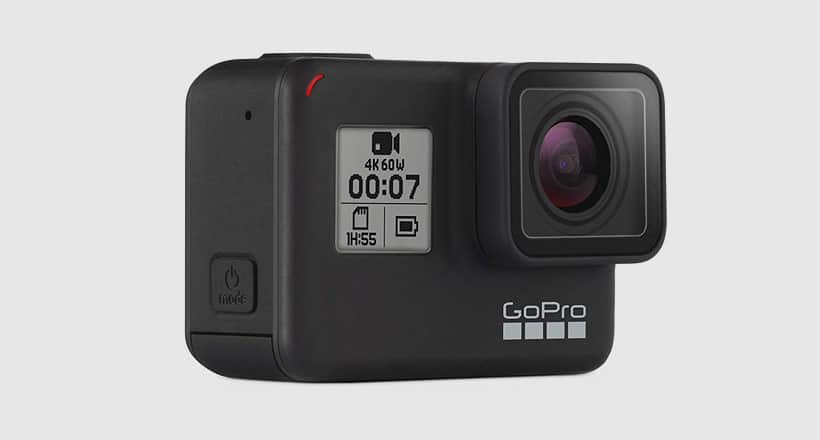 It comes with a rugged and rubberized finish including waterproofing up to ten meters without an added case. There’s a two-inch touchscreen display on the back and a small monochrome display on the front that will give you basic details like time settings and battery level. On the sides of the camera, you’ll find the control buttons for starting recordings and turning it on or off.

We’re providing you these details just in case you’re going through GoPro for the first time. Now, let’s move to the real review of Hero 7 Black with its features and performance.

The biggest improvement in GoPro Hero 7 black is the HyperSmooth Stabilisation. This is a boosted version of already existed EIS (electronic image stabilization) we saw on its predecessor Hero 6 Black. This feature is excellent at controlling shake from vibration and deliver insanely smooth footage.

Hypersmooth works in most video resolutions and framerates, you won’t get it at 1080p once you get to 120fps. Shooting at 4k resolution or 60fps is also fine and should be enough for most of the users.

Although it’s not quite the level of GoPro’s Karma Grip gimbal, it’s built-into the camera and therefore included in the price makes it a pretty good deal – GoPro’s gimbal is $300 itself.

Note that, there are certain places where you can’t opt to use a gimbal such as underwater and mounted to a bike. In that cases, HyperSmooth is going to be a major relieving factor and a big jump up for shooting quality videos.

It is like a ‘magic-carpet-ride’ that gives really smooth results while shooting despite the fast movement. You can select TimeWrap to various speed levels from 2x to 30x depending on how long your video is.

SuperPhoto is a great feature of Hero7 to take better and high-quality images automatically. It intelligently applies HDR, local tone mapping or noise reduction to optimize your shots, without further need for editing.

Some users will like this, and others will hate it. It depends on whether or not you like to edit photos yourself!

The new feature GoPro Hero7 brings is its new live-streaming. This is a feature many of you have been waiting for. It let you share your live stream with your Facebook friends. It’s easy to set up, you’ll just need to connect the camera to your phone’s data connection in ‘personal hotspot’ mode. Then select the live stream mode (We’ve tried this on Facebook and it worked well). You can save your streaming videos to your SD card in high resolution.

The only drawback we’ve found is you can only stream up to 720p but it’s not the end of the world. If you have a slow internet connection, you can select the 480p resolution for live streaming.

Should I Buy a GoPro Hero 7?

Though its user interface isn’t up to the expectations, the Hero 7 Black is significantly more user-friendly than most budget action cameras. It has handy editing options like GoPro’s Quik app for those who don’t want to spend hours in editing footage. That awesome HyperSmooth stabilisation means you’ll have a lot more quality videos too.

The other bonus of Hero 7 Black is its fully waterproof design without the need for a case.

The fact that Hero 7 Black is fully waterproof without the need for a case is another advantage, as is the improved audio quality from its redesigned microphone.

We can’t say it’s perfect because it can get very hot when recording continuous 4K videos. If you compare its sensor, there are no major differences, so it can be a struggle to get slow-motion videos in the very low light. And probably these features are not enough to convince a GoPro Hero 6 owner to consider upgrading.

But if you’re looking for a pocket-friendly and waterproof camera that can shoot some excellent videos from angles where your smartphone can’t, then the Hero 7 Black is one of the best you can buy.

There might be the few improvements in Hero 7 Black from its previous models, but its excellent video quality, stabilization, usability and range of mounts make it the best action camera you can buy right now. Check out the GoPro Hero7 Black to buy.